The Seven Joys of Mary & the Franciscan Crown Rosary 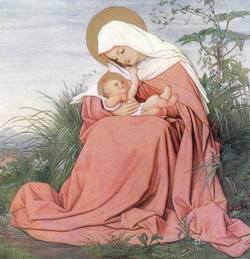 Our Lady of Joy
Seven is a mystical number. Our Lady’s Sorrows are seven and are celebrated twice during the year — on the Friday before Good Friday and on September 15. Our Lady’s joys are also seven and are celebrated on the 27th of August. The Seven Joys of Our Lady are: (1) The Annunciation; (2) the Visitation; (3) the Birth of Our Lord; (4) the Adoration of Jesus by the Magi; (5) the Finding of the Child Jesus in the Temple; (6) the Resurrection of Our Lord; (7) the Assumption of Mary in body and in soul into Heaven. The feast of The Seven Joys of Our Lady is a very special feast of the Franciscan Order and they recite in its honor the Franciscan Crown, which consists of a seven-decade rosary — seven Our Fathers and seventy Hail Marys, to which are added two Hail Marys because Our Lady was seventy-two when she died and was assumed into Heaven.
Where did the Franciscan Crown come from? According to the famous Roman Catholic Franciscan historian, Fr. Luke Wadding, Our Lady appeared to a young novice of the Franciscan Order in 1422 and gave this lad specific instructions on which of the Mysteries were most important to Her. After She instructed the novice in how to say this Rosary, Mary vanished, and the novice began immediately to say the new Rosary. As he did so, his superior in the monastery was passing by and was astonished to observe an angel weaving a “wreath of roses.” These the angel placed on the head of the novice when the Rosary was finished. When the novice explained to his astonished superior what had happened, the superior made it known to the brothers of the monastery, and the “Franciscan Crown” became established.

The Franciscan Order has publicly celebrated a feast of the Seven Joys of Mary since 1906 and in 1942 the feast was moved to its present day, the 27th August.
Powered by